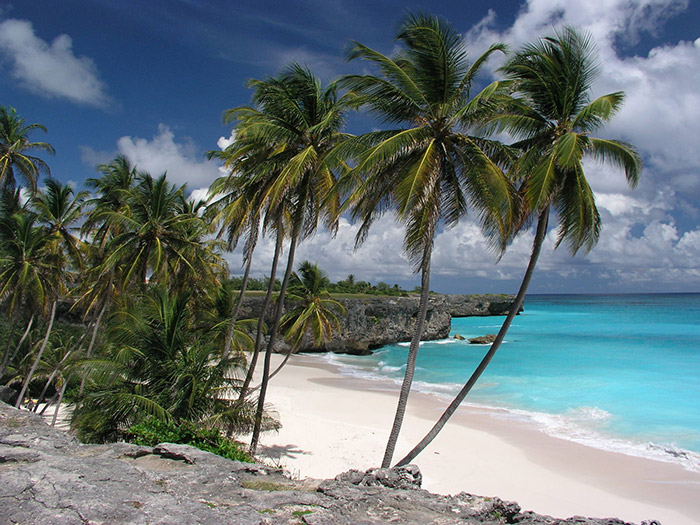 Barbados, a popular island in every respect, very dynamic and with many things to do and see, is a destination for celebrities and the world jet-set attracted by the glamour of the West coast with its luxury hotels and super-chic restaurants but also by the mix of exotic and Anglo-Saxon culture represented by the Anglican churches, the cricket fields and the countless, beautiful beaches.

Ideally, you could divide Barbados into five areas, the West coast dotted with small, very picturesque beaches lapped by the warm, calm Caribbean waters ideal for swimming and sunbathing like Gibbes beach, undoubtedly one of the most exclusive beaches on the island, where there are no hotels but only charming private villas or Paynes Bay, where you can snorkel in the nearby colourful reef and swim with turtles.

The Southern coast is very lively and attracts many tourists, with its beautiful beaches such as the crescent-shaped Accra beach or Enterprise beach, also known as Miami Beach, a long strip of white sand near Oistin, a seaside village which is a favourite destination for the locals. The wild and uncontaminated Eastern coast where the impetuous waves of the Atlantic Ocean break on limestone cliffs that frame impalpable sandy beaches dotted with pink-edged palm trees and finally the inland territory with undulating hills, sometimes interrupted by typical 17th century plantation houses, botanical gardens and sugar cane fields. Barbados offers not only beaches and glamour but also the possibility of excursions by boat, horseback or car to discover its hinterland and its history.

Finally, there is Bridgetown, the capital, which although less appealing hosts sites of historical interest such as the house where George Washington, the first president of the United States, lived, carefully restored and now a museum, within the Historic Garrison Area recently listed as a UNESCO World Heritage Site.

Practical information: The best time to visit Barbados is from January to April, when the climate is drier and there is less humidity. The hurricane season is between June and November with a higher risk between August and October. However, the geographical position of Barbados, further east than other Caribbean islands, shelters it from the direct trajectory of hurricanes. It is true, however, that the risk of rain and bad weather is greater in late summer and early autumn.  In addition, in low season, September/October some hotels, restaurants and bars close, while in the very high season, i.e. in the winter months, there is a sold-out, so it is necessary to book in time.

How to get there: Barbados' main airport is Grantley Adams International Airport.

Time zone: GMT - 4 hours. There is no daylight saving.

Language: English and Bajan, the Creole language of the island.

Government: Parliamentary democracy, Barbados is part of the Commonwealth