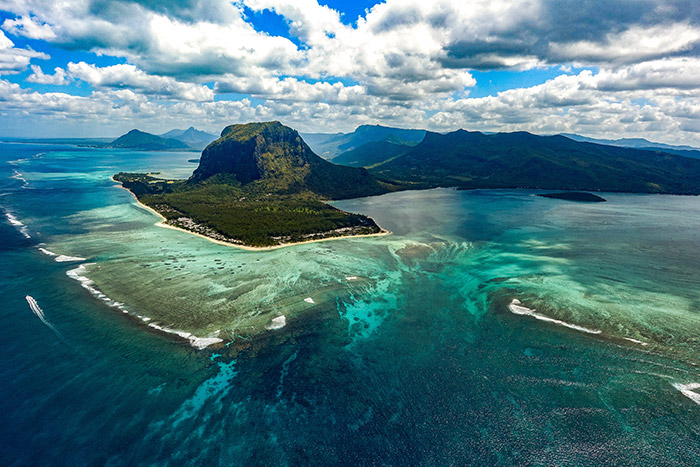 Which Indian Ocean island is the best for a dream holiday? The warm waters of the Seychelles, the coral atolls of the Maldives or the quiet lagoons of Mauritius? The romantic beaches of soft white sand, the green sugar cane plantations, the mild tropical climate all year round, the light breeze of the trade winds blowing across the island make Mauritius a favourite destination for families and honeymooners alike.

Mauritius is a friendly island, a melting pot of different cultures and traditions. Tamil and Marathi, Indians, Muslims and Creole populations who came from Madagascar and Africa mix up with Mauritians of Asian origin. There are also Mauritians of European descent, a remainder of the island's colonial past and its ties with France, Great Britain, Holland and Portugal. English, French and Creole are the three most spoken languages on the island where the multiculturalism and spirit of tolerance are a true example of peaceful coexistence in which churches, mosques, pagodas and temples share the same land.

The landscape is equally varied and fascinating and certainly deserves the nickname “tropical paradise”, with palm-fringed pristine beaches overlooking the thousand shades of blue of the ocean, spectacular mountainous landscapes and silent volcanoes enveloped in the rich, fragrant smell of the sugar cane plantations. Located in the North of the island, the magnificent and immense botanic gardens of the “Jardin de Pamplemousse” is a must-see if you are a fan of trees and you want to see the giant tortoises. Port Louis, the capital, is the main harbour of the island as well as a modern and cosmopolitan city, rich in cultural sites, shops and restaurants.

A stroll in Le Caudan Waterfront is the best way to experience the Mauritian cuisine, a delectable blend of flavours and culinary creations, reproducing the island's cultural mix in the various dishes. Samosa, gateaux piments and the fresh catch of the day on display in the open-air market or on the boats of the fishermen near the beach are just one example of the island's incredible variety of food. The rugged, wild, rural South is often referred to as the most authentic Mauritius. The region of Bel Ombre, with its beaches carved into the rock and the sugar cane plantations boasts a unique landscape..

Ile aux Cerfs (Deer Island) on the East coast, is accessible by boat or catamaran from the mainland; the nature reserve with miles and miles of white, sandy beaches, calm seas and turquoise lagoons is one of the most popular destination in Mauritius. Bras d'Eau, on the Northeast coast is perhaps the best place to enjoy unforgettable Mauritian sunsets or watch the New Year's Eve fireworks organized by many luxury hotels located on the opposite side of the bay. The East coast is where those seeking the best of Mauritian hospitality head to. The newly opened modern resorts and legendary hotels, the grand dames of Mauritius hospitality scene, offer highly personalized services and everything a luxury traveller could wish for: cooking lessons, private excursions, holistic and detox treatments at luxurious SPAs, Michelin-starred restaurants where every wish is satisfied and wine lovers can choose from 25,000 labels of fine wines from all over the world.

Mark Twain was right when he said "Mauritius was made first, and then heaven; and that heaven was copied after Mauritius" because Mauritius welcomes you with its colours, warms your heart with its sunsets, awakens your senses with the fragrance of spices and perhaps who knows, that paradise that everyone dreams of is right here.

Practical information: Mauritius is an all-year-round destination, located in the Southern hemisphere which means that seasons are opposite to ours. The summer season, from November to April, is hot and humid, with temperatures ranging between 32 and 26 degrees Celsius and a greater risk of cyclones. The winter season, from May to October, is cooler and more pleasant with the trade winds blowing from the Southeast and mild temperatures ranging between 24 and 18 degrees Celsius. As in all tropical countries, rains can be intense, especially in the summer months, but they are usually short.

How to get there: Sir Seewoosagur Ramgoolam International Airport is the main airport of the island.

Connections from Europe: several flights to Mauritius are available from the main European hubs through Air Mauritius, Alitalia (seasonal flights), Emirates (via Dubai), Air France/KLM, Turkish Airline (via Istanbul), British Airways, Swiss Air and Lufthansa. Flight time between 12 to 14 hours (depending on the length of the layover).