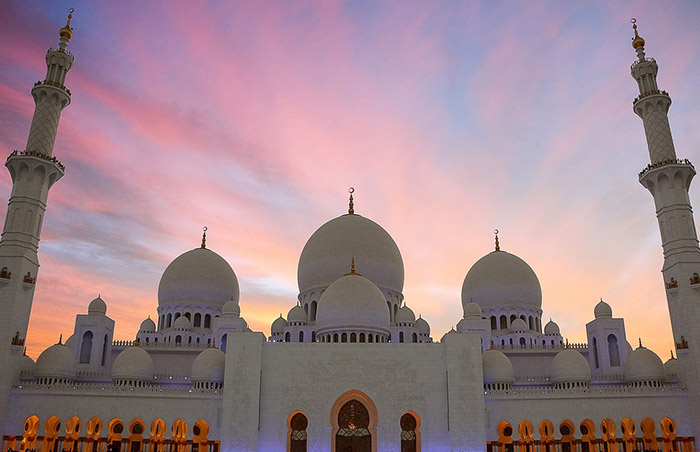 The question is: Dubai or Abu Dhabi, which one is better to visit? Both are home to spectacular attractions, ultraluxury hotels and enormous shopping malls. With its elegant skyscrapers and a cosmopolitan atmosphere, Abu Dhabi is a charming place, a city that did not exist until a few decades ago and that quickly became a thriving metropolis with a strong cultural and artistic vocation.

Abu Dhabi has a lot to offer, there are beautiful beaches and an amazing desert, as well as major attractions as the Sheikh Zayed Grand Mosque, the Ferrari World or the magnificent Louvre Abu Dhabi. Indeed, culture and tourism are the keystones of the economic diversification program launched by the government that has led to the construction of new hotels, museums, theme parks and shopping centres of all kinds but not on the overwhelming scale and opulence of nearby Dubai. Just a few kilometres from the city, there is Saadiyat Island, an island off the coast of Abu Dhabi which is expected to become the main cultural and leisure centre with at least eight museums. The natural landscape with golden dunes sloping down to the superb beach and the warm waters of the sea has been wisely preserved and the Hawksbill sea turtles continue to nest on the beachfront.

The whole island is a protected reserve, a rich sustainable environment with wetlands, waterways and lush mangrove sanctuaries. It is also home of the most luxurious hotels in the world, such as the St. Regis or the brand-new Jumeirah Resort. The Saadiyat Cultural District is expected to become the art hub of the city and a centre of global culture which will attract local and international visitors. One of the main attractions is the Louvre Abu Dhabi, which opened its doors in 2017 but further developments continue in the area to inaugurate the future Zayed National Museum that celebrates the life and achievements of the late Sheikh Zayed and the Guggenheim Abu Dhabi which will host unique exhibitions.

Practical information: Abu Dhabi is one of the seven emirates that make up the United Arab Emirates located in the Arabian Peninsula. The climate is subtropical, hot and sunny throughout the year with mild temperatures from November to April and extreme peaks of over 48 degrees Celsius in summer (June-September).

How to get there: Abu Dhabi International Airport.

Connections from Europe: several flights to Abu Dhabi are available from the main European hubs, mainly operated by Etihad Airways and other airlines. Flight time is about 7 h 20 m, non-stop.

Language: Arabic is the official language; English is widely spoken.