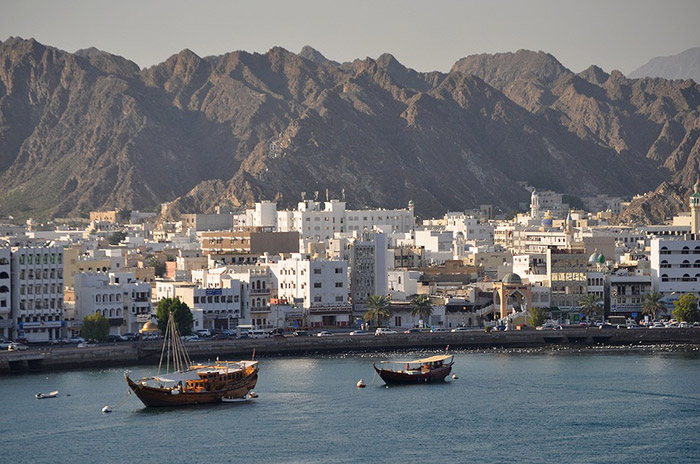 Muscat, the capital of Oman is a unique city, a one-of-a kind example in the Middle East. Overlooking the glittering waters of the Gulf of Oman, the half-moon shaped Corniche recalls a European-inspired “croisette” while the imposing mosques of the old city, the alleys and the maze-like souks are an echo of Oriental history. The ideal gateway of any journey to Oman, Muscat is often underestimated despite the awesome things to do and see in the city..

Muscat sits in the eponymous gulf surrounded by the mountains that overlook the old harbour, a visit to Al Jalali Fort offers remarkable views of Old Muscat. In the afternoon, head to one of the many restaurants on the Corniche to taste the typical Omani coffee and delicious tea and make sure to catch the perfect spot for sunset view. Like most Middle Eastern cities, there are lots of souks and mosques in Muscat: the Mutrah district, once a fishing village, is home to the largest and most lively market in the area. In a maze of streets and alleys sheltered by wooden roofs, you will dive in a mix of colours, smells, sounds and voices, when strolling around the souk don’t forget to stop at one of the many hawkers’ kiosks but be prepared to haggle. Profane vs sacred, the Grand Mosque of the Sultan Qaboos is a true architectural gem, in which the dazzling white of the exteriors blends perfectly with the sparkling gold of the interiors.

Travel South from Muscat through the characteristic wadis along Al Hajar Ash Sharqi up to the Ras al Jinz Reserve, an extraordinary landscape, at the Eastern end of the Arabian Peninsula, where the Gulf of Oman meets the Arabian Sea. The golden beach of the reserve hosts the highest concentration of green turtles that nest and reproduce in total safety. Thanks to an eco-tourism project it is possible to take part in a unique experience and see the sea turtle hatching during summer by booking one of the 12 luxury eco-tents available in the Reserve.

Most travellers are attracted by the mountainous and sea surroundings of Muscat but the charm of Salalah in southern Oman remains the privilege of a few. This ancient port city was the heart of the Frankincense trade, an aromatic resin with a characteristic citrus scent and medicinal properties. Travelling North-West from Salalah, the Rub Al Khali, or Empty Quarter, is a huge stretch of uninterrupted desert which is home of some of the oldest Bedouin tribes. An extremely fascinating environment that remains still unexplored, off the beaten tracks and far from the major tourist routes, a natural wonder of sand dunes stretching across the Eastern half of the Omani coastline. Another place which many people miss is the Musandam peninsula, due to its geographic location in the Northernmost tip of the Arabian Peninsula.  The spectacular bay between the Gulf of Oman and the Hajar Mountains, is an idyllic place, where there is nothing but golden sandy beaches and the crystal-clear waters of the Fjords. The bay is easily accessible from Dubai and Abu Dhabi by land, from Muscat by helicopter or boat and is the ideal place to end a trip to Oman from South to North or a tour in the Emirates.

Practical information: the Sultanate of Oman is a State of the Arabian Peninsula bordering the United Arab Emirates, Saudi Arabia and Yemen. Oman is characterized by an arid and very hot climate, especially in the summer months, when the humidity level is very high. The winter months (until April) are the best for enjoying a good climate and ideal temperature in the Muscat area. The mountain areas have cooler temperatures throughout the year.

How to get there: Muscat International Airport is the main hub, Salalah is the secondary airport and part of Oman Airports.

Connections from Europe: several flights to Muscat and Salalah are available from the main European hubs, mainly operated by Oman Air, Emirates, Qatar Airways and other airlines. Flight time is about 7 h and 30 m, non-stop.

Language: Arabic is the official language; most people have a good understanding of English in tourist areas.