Egypt, a majestic country for an experiential trip through the culture, art and history of an incredibly modern civilization. As soon as we arrive at Cairo International Airport, late in the afternoon we are greeted by an airport representative who accompanies us to the VIP Lounge.  While we wait for our passports to be checked and stamped, we relax with cold drinks and light snacks. Shortly thereafter, we pick up our luggage and meet our tour leader who accompanies us to the Four Seasons Nile Plaza Hotel.

We check in, freshen up and go out to see the Sounds and Lights show at the Pyramids. Around 7:00 p.m., just after sunset, we sit impatiently waiting at the foot of the pyramids to see them come to life with lights and music while The Sphinx tells the deeds of the pharaohs and the history of Egypt. The show is really amazing, it runs in several languages and lasts about 40 minutes.
After the show we return to Cairo to a felucca, the traditional boat, to sail the waters of the Nile. These traditional boats have sailed the Nile for centuries for commercial purposes and are now used as a tourist attraction. We dine on board with typical Egyptian dishes while admiring the lights and sounds of the city at night.

The next morning the alarm clock rings very early and we are ready for a full day tour to discover the Egyptian capital, Cairo a hustling and busting huge city. We start with a visit to the Pyramids and the Sphinx. Of the seven wonders of the ancient world, the Great Pyramids of Giza are the only ones that have survived to the present day. Built some 4500 years ago, they were huge tombs that held the mummies of the Pharaohs Cheops, Chephren and Mycerinus, father, son and grandson respectively. It is incredible to think that it took over two million blocks to build these immense structures! Contrary to what many believe, the pyramids were not built by slaves but by Egyptian peasants who, through this work, paid taxes to the Pharaoh in return for food, clothing and housing. After the pyramids, we head towards the Sphinx, which has the body of a lion and the face of a man wearing a royal headdress. Legend has it that about a thousand years after its construction the Sphinx was buried in the sand until a young prince had a dream in which the Sphinx told him that if he removed the sand, he would become a pharaoh. This story is told on the Dream Stele resting between the paws of the Sphinx.

After a morning spent exploring the pyramids and the Sphinx, we take a break in a delightful restaurant overlooking the pyramids to recharge our batteries before heading to the Egyptian Museum. Those who love history and going around museums know that the Cairo Museum is an incredible place, unique in the world, in whose rooms are kept 7000 years of history, and the treasure of Tutankhamun, the gold mask, the solid gold sarcophagus and the beautiful throne, as well as numerous furnishings and ancient artifacts. The museum is being renovated, it will leave its historical seat in Tahrir Square and after an investment of 1 billion dollars it will become the largest archaeological museum in the world. The GEM, Grand Egyptian Museum, should be inaugurated later this year, after delays and slippages, and is expected to receive 5 million visitors a year.

Our day of tour is not over, after a quick stop at the hotel, we head towards Khan El-Khalili Bazaar, in the heart of the old town. Walking through the maze of alleys and streets we come across street vendors and stalls of all kinds, surrounded by sounds and smells of spices, magic powders, completely veiled women and carts pulled by donkeys painted with bright colors overflowing with watermelons and mangoes. It's almost as if we've gone back centuries. Of the old citadel, surrounded by six fortified gates, only three remain and one of them the Bab Zuweila gate with two well-preserved towers. We end the day with an exquisite lunch at the "Naguib Mahfouz Restaurant", named after the Egyptian Nobel Prize winning author.

LUXOR AND THE VALLEY OF KINGS

The next morning, we get up early to catch an early flight to Luxor where we will continue our visits to the archaeological sites. Our driver welcomes us at the airport together with a private local guide who will take us around and show us the various sites. Luxor is located on the ancient site of Thebes, once the capital of the pharaohs.
Our day in Luxor begins in the Valley of the Kings where the pharaohs of the New Kingdom were buried in hidden tombs. What is most striking are the colours of the pictorial decorations inside the almost intact and lively tombs.
We also visited the tombs of Thutmosis  and Seti I (nella versione Italiana del sito manca la “e” tra Tutmosi e Seti) and then continued to the nearby Valley of the Queens, where Queen Nefertari tomb is located, together with other wives of the pharaohs and their children. Then it is the turn of the mortuary Temple of Queen Hatshepsut where the white of the temple terraces blends with the surrounding limestone. This complex is considered one of the major architectural works of ancient Egypt and is truly spectacular. We then stop briefly to admire the Colossi of Memnon, rising majestically 18 metres, the two imposing statues represent Pharaoh Amenhotep III. 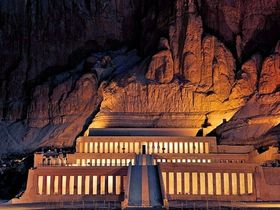 Our intensive excursion to Luxor is followed by an unforgettable lunch on board a traditional felucca to taste local flavours and while sailing the Nile we admire the attractions of Luxor and the lush banks of the Nile. Once docked on the East Bank, we head to the temple of Karnak. This temple, built over 2000 years ago by generations of pharaohs, is dedicated to the God Amon. We were able to see such highlights as the great Hypostyle Hall and the Sacred Lake of Mut. Luxor is such a magnificent city and it would take days to explore all the pylons, obelisks and smaller temples inside, but unfortunately our stay in Luxor was only one day.  Our guide took us to the airport to return to Cairo, where we arrived just in time to enjoy a magnificent outdoor dinner. Although it was not my first trip to Egypt, this country still continues to amaze me with its ancient history, the warmth of the people and the vibrant life of its cities. Anyone who loves to explore and experience something truly amazing must take a trip to Egypt, a country that fills your heart and changes you forever.

If you wish to plan a customized journey to this destination contact me at: This email address is being protected from spambots. You need JavaScript enabled to view it.