Ho Chi Minh City, formerly called Saigon, is the largest city in Vietnam, a mix of tradition and modernity, a metropolis invaded by the frantic traffic of motorcycles, scooters, buses and trucks bustling among green and quiet parks. We visit it in one day trying to capture all its nuances despite our short stay. We leave the cruise port and head towards the city, along the way we admire numerous restaurants on the waterfront, skyscrapers and brand new condos before passing by the Majestic Hotel and the Caravelle Hotel, historic buildings used during the Vietnam War as meeting points for military personnel, journalists and even spies.

Our first stop is Ben Thanh Market, very well known among locals and tourists alike who crowd its streets from the early morning until evening. Walking through the stalls you will find everything from bags and T-shirts to traditional Vietnamese clothes and souvenirs, as well as handicrafts, housewares and local products. The market seems a seemingly endless labyrinth of alleys, alleys, stalls and exits that we visited without ever losing sight of our guide but intrigued, at the same time, by the going in and out of the market of people and tourists. Whole families aboard mopeds, loaded with goods made me think about the creative approach to the concept of transport that the inhabitants of this city have, where practically, if you have even just two wheels you can transport almost everything. Obviously, there are many rather insistent street vendors who come to you to sell their goods and bargain with you for the best price, but this too is part of the soul of Saigon.

After the market we head to the Vietnam Museum of History in Ho Chi Minh, inaugurated in 1929 by the Société des Etudes Indochinoises, where numerous exhibits are on display dating back to the Bronze Age (2000 B.C.), belonging to the Dong Son civilization, the Kingdom of Funan (from the 1st to the Vi century A.D.) and the Cham, Khmer and modern ages.
A giant statue of Ho Chi Minh welcomes us as we enter the museum. The collections include statues of Buddha, Cham, artifacts from Angkor Wat in Cambodia and other historical artifacts.
But the most interesting thing about the visit is undoubtedly the puppet show on the water. Once made to entertain the royal family of Vietnam, this show is now open to the general public, tourists and locals. The performance takes place in a large swimming pool in the museum complex, where the stage is on the water and the audience sits on the sides of the pool. Watching the puppets sliding on the water, doing acrobatics, dancing and "coming to life" while a story of dragons, fish and farmers unfolds is very enjoyable. After the show, the puppeteers come out to receive the applause and the smiles of the crowd.

At the end of the visit to the museum we take a ride on a typical rickshaw, the traditional means of transport widely used in old Saigon for decades and now used mainly by tourists as locals prefer scooters or taxis.
We dive into in the crazy traffic zig-zagging between monuments, parks and shops. After about 10-15 minutes, we arrive in Paris Square to take pictures of Notre Dame Cathedral, with its two 40-meter high towers and the Central Post Office.
Built by the French between 1877 and 1883, the impressive cathedral is one of the few remaining Catholic enclaves in Vietnam. All the stone used to build the church was brought in from France.
Guess what? In front of the church there is a statue of the Virgin Mary who, locals say, apparently shed tears in 2005. The Church has denied the event but still today many visitors continue to crowd here, hoping to see a miracle.
A superb example of French colonial architecture, the nearby central post office is still in use today. Built by Gustave Eiffel (who designed the Eiffel Tower in Paris), it was inaugurated in 1891.

The image of a North Vietnamese tank breaking through the gate of the former South Vietnamese presidential palace on 30th  April 1975 is an indelible reminded in the collective memory. Upon entering the palace we see one of those tanks (though not the original, according to our guide) near the perimeter fence.
After entering the building, we visit the reception hall and the presidential dining room, now used as a meeting or reception area for foreign leaders or businessmen.
Then we make our way to the basement where we see the rudimentary American telecommunications systems of the time and the military maps hanging on the walls. The visit to the building continue to the upper floors and then on outside.

The last stop on the tour is Cholon District, also known as Chinatown, followed by a half-hour visit to the 18th  century Thien Hau Temple, with its delightful ceramic friezes on the roof of the inner courtyard and the strong aroma of incense from spirals suspended from the ceiling. Finally, there is still some time left for some shopping at Minh Phuong lacquer factory where we see craftsmen at work decorating objects and furnishings. 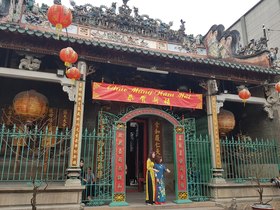 The visit of Ho Chi Minh was short but intense and allowed us to see the many faces of a modern and frenetic Asian metropolis which reminded us an important and painful page of history. Bicycles and rickshaws have been replaced by mopeds and scooters, old building by high-rise skyscrapers and shopping malls, but the soul of Saigon is still there, pulsating in the tiny alleys, the bustling markets and the historical places..
I found the locals welcoming but a bit distant, even wary in some cases, perhaps the memories of the Vietnam War and the difficult post-war period in the late 1970s and 1980s are still vivid in the memory of this people who chase the future but carry the scars of the past.

If you wish to plan a customized journey to this destination contact me at: This email address is being protected from spambots. You need JavaScript enabled to view it.