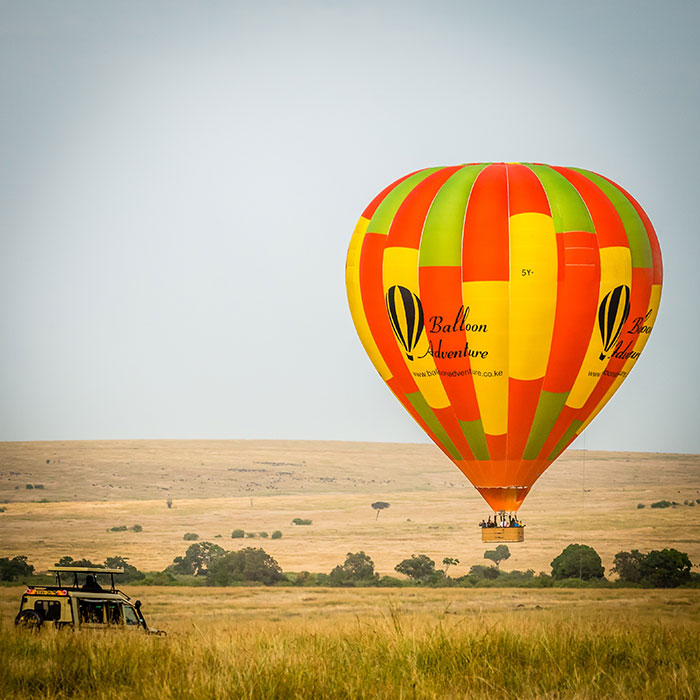 A safari in Kenya is the best way to observe wildlife up close, immerse yourself in nature and reach sometimes inaccessible and remote places. Either in a 4x4 or by plane, a Kenyan safari is an unforgettable experience through endless parks populated by many protected species such as the lion and cheetah of the Masai Mara, the African elephant of the Samburu reserve, the wild dog, the imperial zebra and the black rhinos of the Laikipia region.

A flying safari aboard luxurious ten-seater Cessna Grand Caravan aircraft (equipped with comfortable leather seats and panoramic windows) allows you to fly over these immense areas, sometimes difficult to access, offering a different perspective of this beautiful country.

The Masai Mara National Reserve
The adventure begins in Nairobi, Kenya's vibrant capital city, with a visit to David Sheldrick Elephant Orphanage, a centre specializing in the rehabilitation and care of orphaned or endangered elephant cubs, and the Nairobi Giraffe Centre dedicated to the protection of the Rothschild giraffe, before continuing on board an elegant private jet to the Great Rift Valley and the Masai Mara National Reserve. The galloping zebras and sinuous giraffes eating from the trees are immediately visible from above, along with funny hippos floating softly like drifting buoys on the Mara River.

The exciting overflight ends with a soft landing on a private airstrip and the return to the lodge where you can spend the evening in total comfort and relaxation. Most of the lodges or private concessions in Kenya are not fenced but the Masai warriors, armed with spears, belonging to the eponymous local tribe protect the territory and the safety of the guests during the night. Nobody knows the territory and its inhabitants better than the Masai and Samburu tribes and thanks to their knowledge and experience it is possible to carry out projects for the protection and conservation of wildlife and local biodiversity.e.

The Masai Mara National Reserve, an immense savannah rich of thick acacias foliage is a vantage point of observation to spot the big cats up close. Almost a quarter of the 20,000 existing lions live within the Masai Mara, which is also one of the best places in the world to meet the cheetah, although the number of these felines has even halved in the last 30 years. Moreover, the period between July and October is the best time to witness the extraordinary phenomenon of the great migration during which almost two million wild animals, zebras and antelopes, migrate through the Serengeti-Masai Mara ecosystem.

The Loisaba Conservancy, Laikipia
The undulating plains give way to cultivated hills while flocks of pink flamingos colour the Elementaita Lake rising in formation as the small jet passes over the emerald-green waters of the lake. The safari in the Loisaba Conservancy in search of another endangered animal species, the African wild dog, ends with an aperitif in the bush, during which we exchange impressions and opinions about the exciting day while watching the sunset.

Back at the lodge, dinner is served with local dishes such as nyama (grilled meat), sukuma wiki (traditional vegetable side dish that accompanies meat), ugali (corn polenta) and kachumbari (tomato and onion salad) before retiring to our suites for the night or in elegant tents with private patios that offer breathtaking views of Laikipia and Mount Kenya in the morning.

Tented camps immersed in the bush offer an authentic experience in comfort and luxury, but nothing compares to the star beds, real outdoor beds, placed on special platforms, where you can sleep an entire night under the stars of the African sky, surrounded by the sounds of nature and immersed in the immensity of the universe.

The Lewa Wildlife Conservancy
Created in 1983, Lewa was Kenya's first private conservancy (today there are 160 conservancies in the country run by local communities).

Originally it was supposed to be a rhinos sanctuary but gradually other programs were added to it dedicated to the monitoring of the elephant population, the breeding of the Grevy zebra (here you can find the largest number of specimens in the world) and various projects to study predators and their behaviour in the wild.

At Lewa, safaris focus on rhinos, with expert guides and naturalists accompanying guests in search of the few remaining specimens of black and white rhinos. The safari thus becomes an opportunity for study and active participation in the anti-poaching activity promoted by the Lewa Conservancy, where every single specimen is monitored and protected.

A safari inside the Samburu Park is like no other, here the guides know every single elephant and even the jeeps become part of the herd slowly and respectfully queuing up with these majestic creatures.

At the end of the day, overwhelmed by emotions and already full of ever-lasting memories, you return to the lodge, welcomed by the Samburu women and men who invite you to take off your shoes to feel Africa under your feet. The cosy suites are elegantly furnished with local materials and brightly coloured fabrics, the mouth-watering menu is made of local produce and it’s a feast for the palate.

And when the journey ends, you realize you've fallen in love with a unique place in the world that you already miss and would never want to leave.

Practical information: Kenya is located the East coast of Africa on Equator, there are highlands and mountains as well as huge expanses of forests and savannahs. Although it is a tropical country, the altitude makes its climate very different from one region to another with mainly warm and humid weather on the coast and cooler temperatures on the highlands. There are two rain periods: from March to May (heavy rains) and from October to December (small rains).  The wild is the kingdom of the Big Fives and many animal and plant species. The coastal white, powdery beaches have become a popular destination during the winter months.

How to get there: the main airport is Nairobi’s Jomo Kenyatta airport where all the international flights of the major airlines land, followed by Wilson airport mainly used for domestic and regional flights. Along the coasts of the Indian Ocean, Mombasa’s international airport is the main hub to reach most of the seaside resorts. The parks are connected through the numerous airstrips, small runways reserved to private jets located in the reserves near the lodges and tense camps.

Connections from Europe: several flights to Nairobi are available from the main European hubs through Etihad Airways (via Abu Dhabi), Qatar Airways (via Doha), Emirates (via Dubai), Ethiopian Airlines (via Addis Ababa), Kenya Airways. Flight time 8 hours and 45 minutes and time may vary depending on the length of the layover.