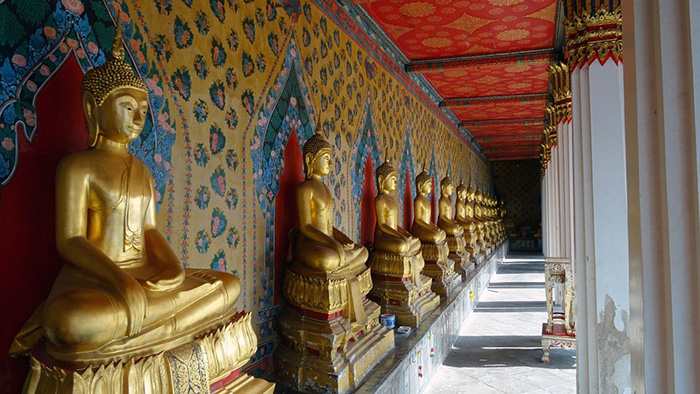 With over fifteen million tourists every year, Thailand is the most popular, vibrant and diverse Asian destination. The country offers visitors plenty of attractions: pristine rainforests, spectacular coastal landscapes, golden beaches, floating markets, sites of world interest and ancient mountain tribes that still survive with their customs and traditions. Thailand also boasts some of the world's most exclusive luxury resorts, whether it be exclusive enclaves on immaculate beaches, city hotels or luxurious jungle camps.

Welcome to Bangkok, a sprawling metropolis of over ten million people, where in the hottest months the humidity puts to the test even the most daring traveller. Built on the Eastern banks of the Chao Phraya River more than 200 years ago, today, Thailand's capital city is rich with historical sites of interest, high-class hotels, incredible food and shopping experiences. The world-renowned art scene and street-food culture but also the countless monuments, sounds, flavours, aromas and metropolitan moods enchant a growing number of visitors. Bangkok is famous for its temples, palaces, malls and markets, but the smile on people's faces is what gives the city a human and pleasant dimension.

The classic itinerary to discover the city starts from Rattanakosin Island, the historical heart of Bangkok. A visit to the Grand Palace complex is a must for first-timers. The main building is the work of British architects, in a balanced mix of Thai and Italian style. Inside the temple complex, the Wat Phra Kaew houses the Emerald Buddha, Thailand's most revered religious icon, while scenes of the Ramakien, the Thai version of Indian Ramayana, are painted on the walls.

On foot you can reach the Wat Po temple complex famous for the huge statue of the reclining Buddha and the massage school where you can learn the various techniques but also do traditional Thai massages.

After visiting the Grand Palace, a stop on one of the terraces overlooking the river and the Wat Arun, the temple of dawn, located on the opposite bank, is a must. And after a quick lunch with delicious Thai food, such as the lamb in curry sauce or the spicy prawn salad, prepared with lychees, mint leaves and lemongrass, you can still wander around the small shops and stalls of the nearby Tha Prachan Market.

Those who want to get away from the most popular tourist routes can board a boat that sails along the river and head North to the last stop in Nonthaburi. The trip takes about an hour and allows you to see the city from a different perspective, reaching the suburbs and the rice plantations nearby. On the way back, at sunset, the iconic Wat Arun appears on the opposite shore in all its splendour, while the boat heads towards Saphan Taksin, the central pier from which you can reach downtown in a few minutes with its glittering hotels, bars and luxury restaurants.

The famous and colourful floating markets of Amphawa and Damnoen Saduak are a must not only for taking beautiful pictures but also to get a closer look at daily life of local people busy in their business activities. Although some of these markets have now become real tourist attractions, there are still small markets that offer an authentic experience with stalls overflowing with tropical fruits and vegetables, coconut juice ready to drink and traditional food freshly cooked in real floating kitchens built next to the boats. To visit a floating market, you need to go early in the morning when the vendors arrive on the small wooden boats, carrying the goods, fresh fruit, spices and tasty food.

Chinatown is another extraordinarily authentic place in Bangkok with its narrow streets crowded with people who spend their afternoons browsing the gold shops and traditional medicine centres. During the Chinese New Year, usually in late February, the whole neighbourhood is filled with the sounds and colours of the festive parades passing through the streets and the alleys are crowded with countless street food stalls and Chinese souvenirs. 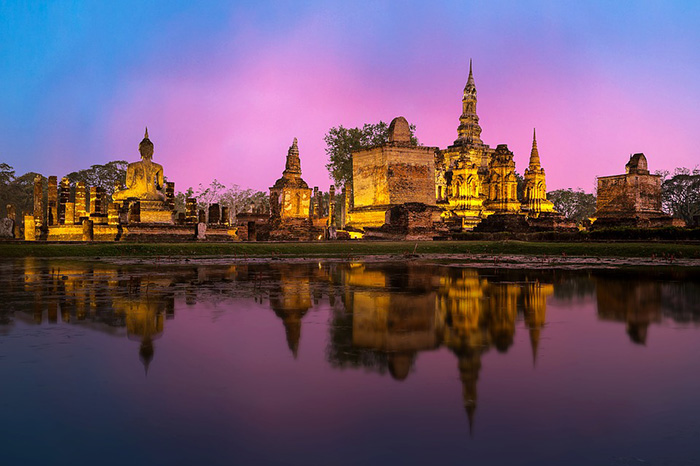 The historic city of Ayutthaya, founded in 1350, was the second capital of the Kingdom of Siam; between the 14th  and 18th centuries it experienced the greatest expansion, becoming one of the largest and most cosmopolitan urban areas as well as a renowned centre for world diplomacy and trade. Thanks to its location above the tidal front of the Gulf of Siam, the city was sheltered from the attacks of the warships that sailed through the seas. However, in 1767 it was pulled down by the Burmese army who burned it and forced the population to leave. Ayutthaya was never rebuilt on the same site and what remains of it today, the temples, ruins of palaces, statues and monasteries are part of the extensive archaeological park declared a UNESCO World Heritage Site in memory of the glorious past of the Kingdom of Siam.

Chiang Mai is the second most important city in Thailand about 700 km North of Bangkok. In addition to being an extraordinary, wat-rich city, Chiang Mai offers countless outdoor activities such as zip lines, hot-air balloons and mountain excursions. But the main attraction of Chiang Mai are undoubtedly the elephant sanctuaries where you can see these animals up close in their daily activities. The Thai Elephant Conservation Centre is the only government-owned elephant sanctuary and training school dedicated to the care of these animals. Visitors can also become mahout (elephant trainers) for one day. After putting on the appropriate clothes to protect themselves from the animal's surprisingly shaggy hair, visitors light an incense stick on the altar of Ganesh (the Hindu god of elephants) and then sit down to get to know the animal and learn the necessary commands to guide it. The funniest and most engaging part is when you swim in the lake with these sweet creatures. The day ends with a trekking along the paths and with the "diploma" ceremony and the delivery of the mahout certificate.

Chiang Mai is also famous for its night markets where you can buy silk, linen, flower-shaped carved soaps and handicrafts, but also eat delicious shumai (pork ravioli) or chili and coriander noodles. The Night Bazar is open every night from 8pm to midnight while the Wualai Market only on Saturday nights, both markets are also very popular among the locals who go there after work.

Wat Phra That, is the most famous temple in Chiang Mai located on Doi Sutherp Mountain. A long staircase of 306 steps leads to the panoramic terrace of the temple from where you can enjoy a beautiful view of the city. Also, the Wat Phra Singh, is a marvellous example of Lanna architecture, where can see one of the most sacred religious images, the Phra Singh.

Lush jungle, mist-covered mountains, herds of elephants and tranquil rice paddy make up the landscapes of the Golden Triangle, Thailand's northernmost point on the border with Laos and Burma, where the waters of the Ruak River flow into the majestic Mekong. The region became famous in the 1920s as a centre of opium production and trade in Southeast Asia, but those times are now gone forever. Today, the Golden Triangle is a place that inspires peace and serenity, with its villages inhabited by mountain tribes, ancient temples and markets. This picturesque landscape was the beating heart of the Lanna culture that prevailed for several centuries and took on the name of "Kingdom of a million rice paddies". The city of Chiang Rai became the first capital of the Lanna Kingdom in 1262, with King Meng Rai, and is today the gateway to the Golden Triangle. Chiang Rai also has numerous temples and monuments such as the famous Wat Rong Khun, the White Temple.

Phuket, the Pearl of the Andaman Sea

Phuket is the largest island in Thailand, a tourist destination for both budget and ultra-luxe travellers. Golden beaches, emerald-green sea and unforgettable sunsets are the backdrop to a holiday of relaxation and more. In fact, with rain or shine, Phuket offers plenty of activities and excursions for a perfect island getaway.

Although not particularly known for its temples, Phuket has at least 29 Buddhist temple complexes scattered here and there on the island. Don't miss Wat Chalong in the South of the island, not far from the Big Buddha, the most revered and visited temple, surrounded by jasmine gardens and lotus flower ponds, the temple houses dozens of golden Buddha statues.

It takes three hours by car to reach Khao Sok National Park, but once there it seems like being back 435 million years ago. Nature is overwhelmingly lush, with huge flowers and plants, lakes and waterfalls. You can do trekking, canoeing, elephant riding or kayaking along the Sok River during the day and spend and overnight in a quaint floating cottage.

Practical information: Thailand is a Southeast Asian country bordering Laos, Cambodia and Burma. The climate is typically tropical regulated by the monsoons with high temperatures all year round and two prevailing seasons: the dry season, from November to April, ideal for visiting Bangkok and a seaside holiday in Phuket, and the wet season, from May to October, characterized by heavy rainfall and high humidity. The north of Thailand is less rainy and temperatures are slightly lower, especially at night. In the northernmost mountainous areas temperatures are cooler in January and February.

How to get there: Suvarnabhumi Airport, BKK About 28 km E of Bangkok. Don Muang International Airport, DMK About 24 km NNE of Bangkok

Language: The main language spoken in Thailand is Thai. English is the most common second language.

Religion: The main religion practised in Thailand is Buddhism