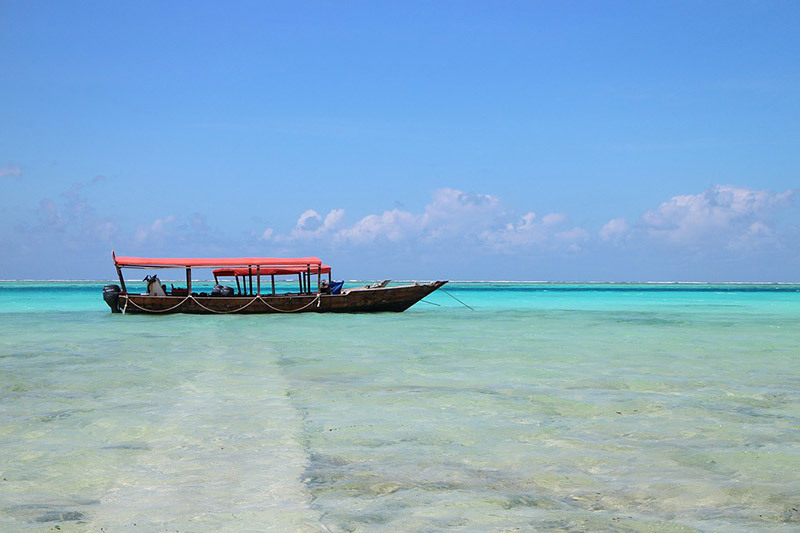 Off the coast of Tanzania, in the heart of the Indian Ocean, Zanzibaris is surrounded and is described by an archipelago of smaller islands, Mafia, Mnemba and Pemba, Zanzibar is described by many as the "new Mauritius". Although in the past it was only a place where to spend a few days in total relaxation after a safari in the Serengeti, today, the countless luxury resorts and the enchanting eco-friendly islets, have led the island to be in the limelight as a destination per se.

On the South-East coast of Zanzibar, near the town of Bwejuu, the Indian Ocean begins to disappear by mid-morning. Walking North along the beach towards the cliffs of Pingwe, you can see the sea withdrawing beyond the reef, over a kilometre away, while small turquoise pools appear here and there among small dunes of sands and infinite shades of blue, aquamarine and iridescent white, populated by huge red starfish and black sea urchins that sneak away under the hot sun of the Equator. At noon, groups of Hadimu men and women looking for octopuses or algae for their subsistence, look like a splash of colour on the ocean and their songs in Kiswahili, the local language, merge with the sound of the waves crashing on the reef. Unguja, this is the official name of the island, is located 25 miles off the coast of Tanzania and is one of the many islands that make up the Zanzibar archipelago, a magical place where life is affected by the tides, an integral part of the territory.

From North to South, Zanzibar offers the traveller innumerable natural beauties, from the vast spice plantations, to the Jozani National Park up to Stone Town, the capital, a UNESCO World Heritage Site. Stone Town is a major trading harbour and a gate to East Africa as well as an exquisite example of urban architecture, with its beautifully carved wooden doors putting together various elements of the Arab, African, Indian and European culture.

Traveling North through the lush rice plantations and mango tree-lined roads, you reach the fishing village of Matemwe; farther away you get to the beaches of Kendwa and Nungwi probably the most beautiful of the island, where you find the most exclusive resorts whose opulent architecture evokes the magical atmospheres of ancient Persia and India. Enchanting white villas in pure African style stand out among frangipane and bougainvillea trees, golden silks and saffron-coloured fabrics adorn the interiors, brass and candles light up the lounges and the gardens. Life here goes on languidly or pole pole, i.e. slowly slowly as the locals say, with a morning fishing trip followed by an afternoon excursion to Nakupenda, which means I love you in Ki-Swahili, the amazing sand bank that disappears in the middle of the Indian Ocean and a romantic candle-light dinner on the patio of a private villa. Zanzibar, the no-longer hidden gem of the Indian Ocean, is a place to get lost into nature and rejuvenate and the ultimate luxury destination for the affluent traveller.

Practical information: located in the Indian Ocean off the coasts of Tanzania, it forms the archipelago of Zanzibar with Pemba, Nmemba, Mafia and other smaller islands. The official name of the island is Unguja, but it is simply known as Zanzibar. Zanzibar is located a few degrees South to the Equator, the climate is predominantly tropical and hot all year round. The island is characterized by two rainy seasons, the long rains and the short rains. The long rains are mainly from March to May, while the small rains are more frequent between October and December. The best time to visit Zanzibar is the so-called "Zanzibar winter", that is, during the driest months of June, July and August. However, January and February are also good, considering that it is hot and humid with a prevalence of short morning showers.

How to get there: Zanzibar's main airport is the Abeid Amani Karume International Airport where most international airlines arrive.

Connections from Europe: several flights to Zanzibar are available from the main European hubs through Etihad Airways (via Abu Dhabi), Qatar Airways (via Doha), Emirates (via Dubai), Ethiopian Airlines (via Addis Ababa), Kenya Airways (via Nairobi). Flight time between 11 to 13 hours (depending on the length of the layover).